About Andrew and Deanna 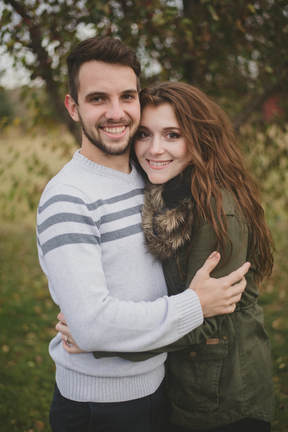 ​
We were married on June 3, 2017, in La Crete, Alberta, Canada, where we continue to live.  Andrew grew up in ministry family, who served in Shipyard, Belize for 5 years, and in 2009, after moving back to Canada, we began a bilingual music ministry that has since become the full-time work of his parents, Diedrich and Nettie Friesen.
Deanna also grew up in a musical family, in La Crete, AB.  She has always been passionate about serving the Lord with her gifts.
​
Since serving with D'Friesens in a variety of settings we have also seen the need for Low German materials.  We believe that God has given us gifts that we are to use to spread the Gospel, and so we have also begun in the work of translating and writing songs and devotionals to provide the Low German people with resources.  We continue to serve with D'Friesens in music as well.  We have signed on with Multi-Nation Missions Foundation in order to continue to reach the Low German people of the world with the love of God.

We Exist To:
-Evangelize those who have not yet heard or accepted the Gospel
-Encourage those who are already in the faith and facing opposition
-Educate people in the knowledge of the Scriptures and in any other area of life as needed

As a family we are passionate about using our gifts and abilities to serve the Lord.  It was while serving in a Mennonite colony setting some years ago (2004-2009 in Shipyard, Belize) that our eyes were opened to the power of music in communicating God's message of love and forgiveness.  It crossed the cultural barriers more effectively than any other evangelistic tool available to us.  We also realized very quickly the shortage of any kind of resources in the Low German language.  This was a problem because our work was primarily with Low German speaking people.  We sensed the call of God to continue reaching out to the Low German Colony Mennonites of the world, and to do this by helping to develop more resources in their heart language.  Since returning to Canada, we have been heavily involved in a bilingual music ministry.  We travel much, singing and preaching in either English or Low German.  There was precious little available in Low German, so we have been translating and writing many of our own songs.  There is also much need for other resources, such as radio programs, evangelistic tracts, devotional books, children's story books, Sunday School material, Bible study materials and the list goes on.  It is our desire, and we believe we are led by God to do our best to help provide the people and the missionaries who are ministering to them with as many resources as possible.

With this in mind, we have signed on with Multi-Nation Missions Foundation, who share our passion to reach the world with the love of God.  They support and encourage us in the endeavors of producing music in both the English and Low German languages and producing resources to evangelize, encourage, and educate our Low German brothers and sisters.

Multi-Nation Missions Foundation is a Canadian charitable organization.  It was founded by Gerhard and Luise Wiens in 1983 in the province of British Colombia, Canada.  In 1985 MMF was registered as a Charitable Organization with Canada Revenue Agency.  The Wiens' first had a burden to reach old Mennonite Colonies in Mexico.  So, their first ministry of preaching and teaching happened in Mexico from 1983 to 1990.  In 1990 the Wiens' started ministry in the Ukraine.  In 2006, Gerhard's health deteriorated and his oldest son Helmut Wiens became the Executive Director.

The years of 2012 to 2014 were years of unprecedented growth.  During this time many more agencies and individuals signed agreements with MMF to become part of the organization.  MMF works in different countries such as Bolivia, India, Africa, Europe, Ukraine, etc.

Vision and Mission
To publicly meet together for worship, prayer and to teach the Holy Scriptures and preach the Gospel of Jesus Christ, disseminate Christian doctrines and encourage and aid the growth, nurture, practice and manifestation of such in the lives of individuals and the community in general.

To support and maintain missions and missionaries in order to propagate the Christian faith, promote the Gospel of Jesus Christ and provide compassionate, humanitarian and spiritual assistance to relieve suffering and poverty in order to improve the quality of life for needy persons in keeping with the tenets of the Christian faith.